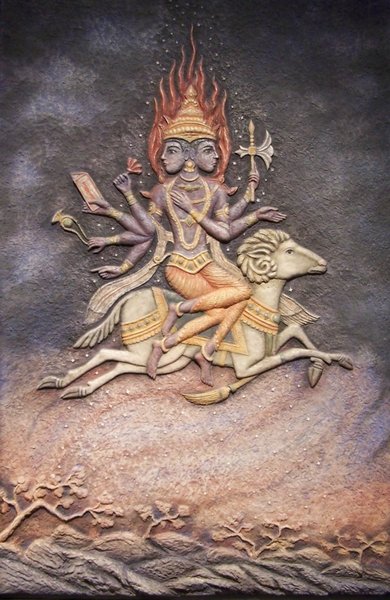 Can be shipped in 15 daysStocks: 1

Polychrome decorative relief made of reconstituted marble (marble powder agglutinated with chronolite) with an aged patina, inspired by universal art.

Relief mounted on a wooden frame.

Measurements refer to the set with frame.

Relief inspired by a Hindu painting of the God Agni.

In Hinduism, Agni (from the Sanskrit word agni: “Fire”) is the Vedic god of the “Creative Fire”.  Together with Indra and Surya, he forms the Vedic trinity, later replaced by the Puranic trinity of Brahma, Vishnu and Siva. Agni is depicted with two faces (suggesting both beneficial and destructive effects), black eyes and hair, three legs and seven arms. His symbolic vehicle is a billy goat.

He is known as the god of fire, but after the Vedic trinity he was also regarded as the messenger of the gods and mortals. He was also in charge of protecting men and their homes.