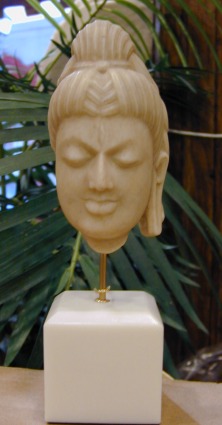 Can be shipped in 6 daysStocks: 1

Reproduction of a figure of Shiva in reconstituted marble (resin + marble powder and grain). Aged patinas with natural earth.

High-quality recreations of classic Indian art, ideal for decoration or as a gift.

Reproduction of the head of the Hindu god Shiva. Nalanda. Bihar. Pala Art. 9th-10th century. In Hinduism, Shiva is one of the three main gods of the Triad or Trimurti along with Brahma, the creator god, and Vishnu, the preserver god. Shiva represents the destruction of forms which allows the birth of new forms.

In the images Shiva is depicted with three eyes, one of which is in the middle of his forehead (denoting his ability to see the three divisions of time: past, present and future), his skin is greyish blue (covered with ashes). A crescent moon above his forehead represents the division of time into months, a snake around his neck represents the division into years and a necklace of skulls represents the successive extinction and generation of the races of mankind. He has several snakes coiled around his arms, his hair is tangled in several clumps on his head and forms a spiky bun on his forehead. Above this hollow is seen the bouncing and materialisation of the river Ganges (the mother Gangā, ‘the Swift’ or literally ga-n-gā ‘goes and goes’), which he intercepts in its eternal invisible fall from the sky (at Gangotri, a glacier in the Hima-alaya mountains or ‘abode of ice’) to prevent it from sinking the earth with its force.

Be the first to review “Head of Shiva. 15 cm.” Cancel reply