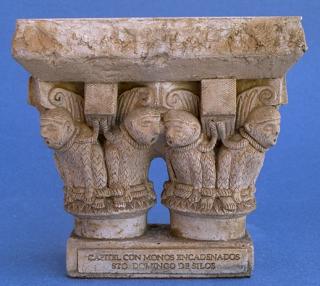 This double Capital crowns one of the columns that gives way from the cloister to the chapter room of the Benedictine Monastery of Silos. Its basket is decorated with figures zoomorphic-apes-acuclilladas and imprisoned by thick ropes that adhere its legs in a winding way. Other strings, which depart from the dice of the capital, surround their necks. The ridiculous expression of their faces reinforces the condemning character of the scene, considered as a negative representation and symbol of sin. As for its style, the relief belongs to the so-called ‘first workshop’ of Silos, positioning itself chronologically in the first decade of the 12th century.