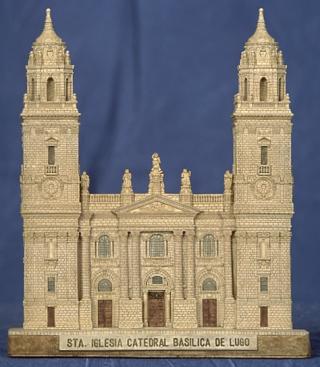 Model of the Cathedral of Lugo, made of marble reconstituted with resin.

Cathedral of Lugo. Its construction began in the first third of the 12th century, during the episcopate of Pedro III, who wanted to renovate the old church of Santa María built by the bishop Odoario el Repoblador.

Its construction lasted several centuries, hence the combination of all styles, from Romanesque to Neoclassical. The first stone was laid in 1129, with the master builder Raimundo de Monforte in charge of the works. Once the building was finished, the reforms and extensions began.

In the 14th century, the ambulatory and apse chapels were built. In the 16th century a Renaissance portico was added on the northern side and in the 17th century, between 1678 and 1682, the sacristy was built. The main neoclassical façade was completed in 1778 and features the four evangelists, Saint Capito (the first bishop of Lugo) and Saint Froilán (patron saint of Lugo).