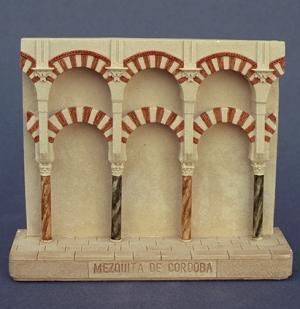 Reproduction made in resin, finished with ageing patinas and polychrome.

Detail reproduction of the Mosque of Cordoba.

The cultural splendour that the city of Cordoba experienced during the Caliphate period was evident in the construction of the Mosque of Cordoba, a building erected between the 8th and 10th centuries, with successive alterations and extensions that were carried out by the different dignitaries of the Cordoban Caliphate.

The first mosque was built by the Caliph Abd al-Rahman I between 786 and 788 on the site of the former Visigothic church of San Vicente. It consisted of an almost square Haram and eleven naves of twelve bays each.

Its interior was notable for its innovative support system combining columns with superimposed pillars, round arches and horseshoe arches. Abd al-Rahman II undertook its extension from 848 onwards by demolishing the wall of the Kibla and adding eight more sections. Later, during the reigns of ‘Abd al-Rahman III, al-Hakan II and Almanzor, further alterations were carried out to give the building its final appearance.