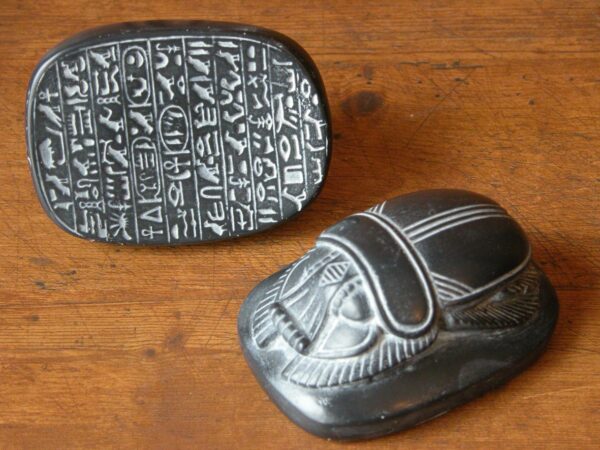 Figure made of reconstituted marble (resin + marble powder). Reproduction of archaeological models from museums around the world.

Egyptian scarabs are usually small figures in the shape of a scarab beetle, made of a variety of materials, including stone, precious stones, ivory, bone, faience or metals such as gold. The lower part had written texts on it. Their functions were diverse: as amulets to protect the wearer; in the funerary cult, the scarab replaced the heart and formulas were inscribed on it so that during the trial of the Souls the heart of the deceased would not testify against itself. Other times they functioned as seals, with the name of the owner, to mark products and goods, or with a text commemorating an important event.

In Egypt, the scarab beetle was a symbol of Jefri or Khepri, one of the aspects of the Sun God, who takes this form when he drives the Sun through the firmament. Khepri means “the one who comes into being”, “the one who is born” or “the one who transforms himself”. He is the self-created God who is born of himself.