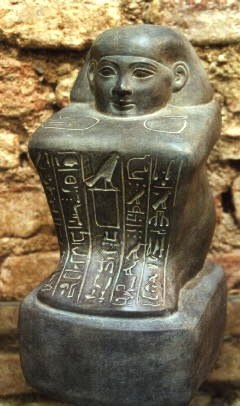 High quality reproduction made of reconstituted marble (marble powder plus binder). The ageing patinas are applied with natural earth.

The cube statues appeared in Egypt during the Ancient Empire and had a considerable apogee during the New Empire. They consist of a cube, covered with hieroglyphic inscriptions, from which only the head protrudes. The figure is seated with his legs bent over his chest, his elbows resting on his knees and his hands folded. The individual is depicted with a respectful, hieratic attitude and maximum concentration. His body is formed from a block of stone from which the head emerges, the image of an ever-living consciousness, just as the sun emerges on the horizon.

Be the first to review “Cubic statue of Scribe. Height: 26 cm.” Cancel reply