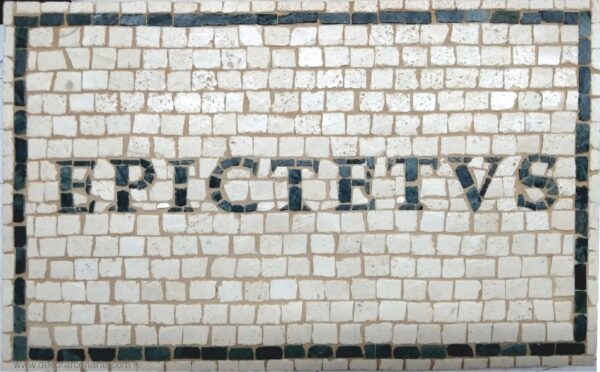 Can be shipped in 15 daysStocks:

Reproduction of a Roman mosaic, completely handmade, using the same techniques as two thousand years ago.

The technique used is “opus teselarium”, a mosaic of cubic stone tesserae.

Tesserae of up to 8 mm of natural stone and marble have been used in its manufacture. Fixed in mortar with a metal structure. Ready to be hung on the wall or as flooring on the floor.

Reproduction of a mosaic with the name “Epictetvs”. Epictetus (55 AD – 135 AD) was a Greek Stoic philosopher who was a slave of Emperor Nero’s secretary, the freedman Epaphroditus, until his manumission. He was later exiled by an edict of the emperor Domitian, who banned philosophers living in Rome, and took refuge in the Greek city of Nicopolis, where he founded a school, following the trend of Stoicism. He left nothing written down; it was his disciple Flavius Arrian who collected and edited his teachings.

Stoicism is presented as a set of very useful teachings for facing adversity and achieving inner serenity and joy, as well as great strength in difficult circumstances, recommending self-knowledge, self-control and the development of what makes us human. Freedom, they said, depends on the extent to which we free ourselves from ignorance, fear and passions.