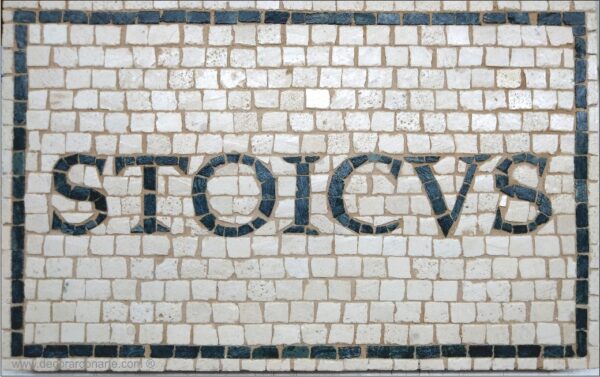 Can be shipped in 15 daysStocks:

Reproduction of a Roman mosaic, completely handmade, using the same techniques as two thousand years ago.

Tesserae of up to 8 mm of natural stone and marble have been used in its manufacture. Fixed in mortar with a metal structure. Ready to be hung on the wall or as flooring on the floor.

Reproduction of a Roman mosaic with the Latin word “Stoicvs”. The word “Stoic” comes from the Greek “Stoa”, colonnade, after the Stoa Poikilé or colonnade of the paintings in the Agora in Athens, where the philosopher Zeno of Citium (ca. 333-262 BC) met with his followers to discuss the philosophical ideas and teachings that characterised Stoicism. The peak of this school of thought would come in the 1st and 2nd century AD, within the Roman Empire. The Roman character, eminently practical, and its longing for the sobriety, austerity and simplicity of the time of the Republic, as opposed to the attachment to luxury of the Empire, meant that Stoicism took root with particular force among this people. The main representatives of Stoicism at this time were a Greek slave, Epictetus, a senator and adviser to emperors, Seneca, and an emperor, Marcus Aurelius. Their works served as a synthesis of Stoic thought, to which they contributed nothing original in theory, giving more value to the daily practice of their teachings.

Stoicism is presented as a set of very useful teachings for facing adversity and achieving inner serenity and joy, as well as great strength in difficult circumstances. They recommended self-knowledge, self-control and the development of what makes us human. Freedom, they said, depends on the extent to which we free ourselves from ignorance, fear and passions.