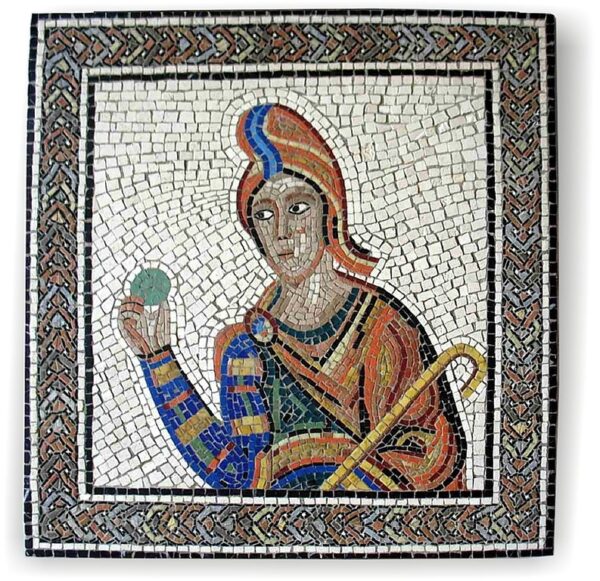 Mosaic of the Judgment of Paris. 53x51cm

Can be shipped in 18 daysStocks:

Roman mosaic of the Judgement of Paris.

A pictorial work made with small pieces of stone, ceramic, glass or other similar materials of various shapes and colours, called tesserae, joined together with plaster, or other binding agent, to form decorative geometric or figurative compositions.

Mosaic made entirely by hand, using the same techniques as thousands of years ago.

The technique used is the ‘Opus Teselarium’, a mosaic of cubic stone tesserae.

In its manufacture, 8mm tesserae of natural stones and marbles of different colours have been used. Fixed on a mortar with a metal structure. Ready to be hung on the wall or as a floor covering.

Eris, the goddess of Discord, was not invited to the wedding of Thetis and Peleus; she threw a golden apple in the middle of the wedding feast with a legend that said “for the most beautiful goddess”. Athena, Hera and Aphrodite pretended that the apple was for each of them and asked Zeus’ opinion. Zeus, fearing to enter the dispute, appointed Paris, a Trojan prince who had lived in isolation on Mount Ida, as judge.

The three goddesses appeared before Paris, accompanied by the god Hermes, messenger of the gods. Hera promised him power over Asia, Athena offered him wisdom in war and Aphrodite the love of the most beautiful woman, Helen, the wife of King Menelaus.

Paris gave the apple to Aphrodite. Eventually Paris kidnapped Helen and provoked the most famous war of antiquity, the Trojan War, and gave rise to The Iliad and The Odyssey.

Be the first to review “Mosaic of the Judgment of Paris. 53x51cm” Cancel reply