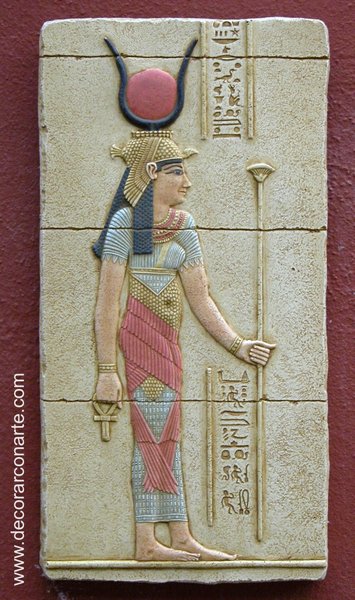 Can be shipped in 3 daysStocks: 1

Relief made of reconstituted marble, (marble and resin) polychromed by hand. Antique finish.

Relief reproduction of the goddess Isis-Hathor. Syncretism between the two goddesses.

Isis is the goddess of life, magic and motherhood. Wife of Osiris and mother of Horus, she is often depicted holding the infant Horus on her lap, a precursor of the Christian virgins or madonnas. She revived with her magic the corpse of her husband Osiris, murdered by his brother Seth. Her symbols are the ladder or stepped throne and the ribbon, which symbolises union. She is also depicted with outstretched wings as a symbol of protection.

Hathor, one of the most important Egyptian divinities, whose name in Egyptian is Het-Heru, was the female principle of the cosmos, the nourishing cow who gave birth to the world and all that it contains, including the sun. She was the goddess of the living, whom she nourished with her fertile udders, and of the dead, to whom she offered bread and water when they left the world. Called goddess “of a thousand names”. Goddess of Love and music and above all Mother. She was represented with the appearance of a cow, between her horns she carried a solar disc, Isis took up these characteristics of Hathor and her symbols, such as the cow’s horns.  As the goddess of music and joy, her emblem was the sistrum.

Be the first to review “Relief of Isis-Hathor. Polychrome. 29 cm.” Cancel reply