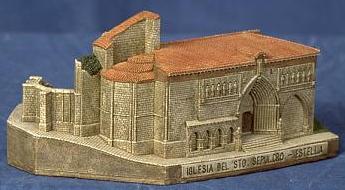 Model of the church of the Holy Sepulchre in Estella, made of stone reconstituted with resin.

Church of the Holy Sepulchre, Estella, Navarre. The city of Estella was founded at the end of the 11th century, when a population of Franks settled on the right bank of the river Ega, opposite the settlement and fortress of old Lizarra. Among the countless examples and material testimonies of its splendid past is the church of the Holy Sepulchre, which was begun in the 12th century, although it was not finished until centuries later.

The façade that opens onto the Rúa de los Peregrinos (Pilgrims’ Street) dates from the 14th century and is made up of twelve archivolts resting on stylised columns. The tympanum depicts scenes alluding to the life of Christ (Last Supper, Crucifixion, Resurrection, Anastasis and Noli me tangere). Completing the ensemble is an apostolate on the upper part of the façade, sheltered by arches decorated with trilobate tracery.