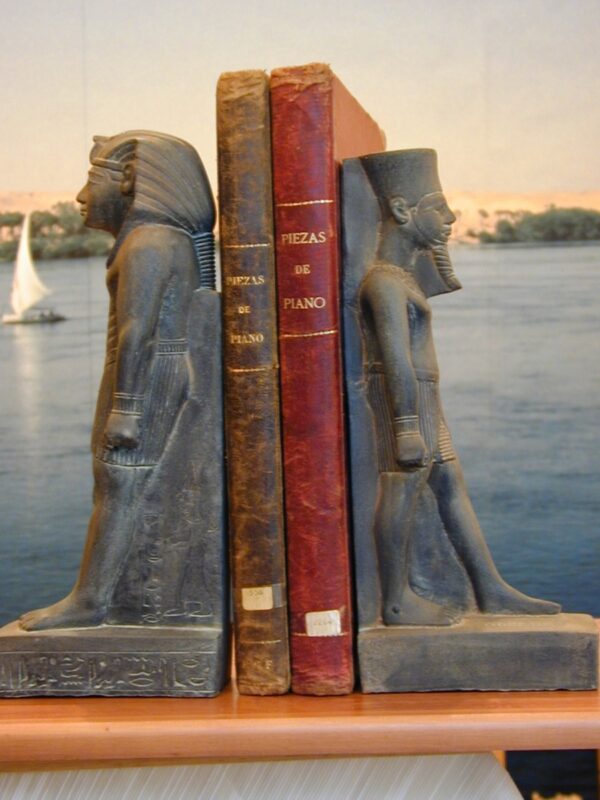 High quality figures made of reconstituted marble. The age patinas are applied with natural earths.

Set of two Egyptian figures imitating the black basalt.
Pharaoh Senusret III Egypt, XII dynasty. Senusret III was the fifth, and certainly the most warrior of the monarchs of this XII dynasty. The king with the bare torso, is depicted standing with his left leg advanced and his arms drooping along the body.
Amon: The hidden One, the god of the mystery, is the invisible murmur that animates the creation, “lighter of the Earth”, presided the royal celebrations that in Luxor celebrated the mysteries of the divine birth. It is usually depicted in the form of a ram with the folded horns. In its fertilizing aspect it is called Min, anagram of Imn, which means the occult. A very ancient hymn appoints him Ammén Ra and proclaims him “Master of the thrones of the Earth… Master of Truth, father of the gods and creator of Man”. He was first revered only in Thebes, the capital of the Egyptian Empire from XI to XX dynasty. While Thebes was only a small town, only Ammon was mentioned. With the XI dynasty, the Sanctuary of Amun is transformed into dynastic temple and becomes the main god of all Egypt, from that time, the pharaoh will legitimize his power considering himself son of Amun-Ra.