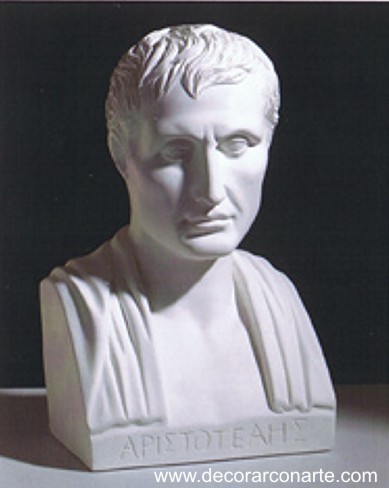 Plaster sculpture. Made with special plasters and iron oxides. 100% natural materials. Not suitable for outdoors.

Reproduction in plaster of a sculpture of the Greek philosopher Aristotle.

Aristotle (384 B.C., – 322 B.C.) was one of the greatest philosophers of the West. He was a disciple of Plato at the Academy, where he remained for 20 years, but after the death of his master, he decided to follow in his own footsteps. King Philip II commissioned him to tutor his son, Alexander the Great. Later, after returning to Athens, he founded the Lyceum, his own school and one of the largest that would exist in Greece, where he taught philosophy.

During his lifetime, Aristotle wrote more than 300 works, in which he developed all branches of knowledge: physics, metaphysics, ethics, biology, zoology, astronomy, politics…